Always a slow reader, I eventually wondered why, as I observed other people skimming a page, seemingly satisfied that they knew what was there. 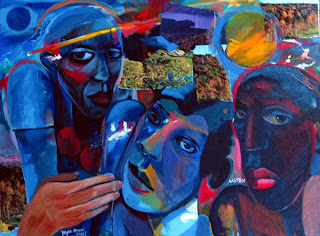 Do other people do this?
Thinking it over, I realized that I make pictures from the words I read, a slow process. Reading   is similar to making a painting or drawing for me. Rarely, is either a quick process. When I see my friends speeding through a novel or even a newspaper I envy them. I, instead, visit each word, one-at-a-time. I turn it over weighing it, deciding if it works, or if the writer meant to use a better word, or if I would have used a different word and what the word means in relation to the rest of the words that surround it, maybe saying it out loud.

Seeing an organized grouping of curves and angles, that could form a portrait, but instead form some meaning in another way and hearing the sound of the word spoken aloud is like seeing a rose and smelling its fragrance. Can you imagine words acting out their own meaning?

If a writer turns a phrase that sounds new to me, I get love-stuck (no, not lovestruck), this time savoring the flavor, getting accustomed to the new taste, unwilling to bite into anything else so I can hold on to the delicious experience. Taking a spoon of sherbet by reading a mildly sweet and bland paragraph to cleanse the palate, is the only solution.


So, I heard something that stopped me this weekend and I wrote it down. That happens, too. I hear a sequence of words that convey an idea in a way that just says it all. These seem to be rare occurrences, but I think we know one when we hear one. This Rhythm and Blues singer, in an interview on NPR, was describing her many years performing and her experiences and said:

"I've done things that people have dreamed of with people they have dreamed about." Bettye Lavette.
In this life how often does anyone get to say that? Forget about saying it so glibly, so masterfully organized and on pitch! The bonus is having the privilege to say it because you have lived that life.
Posted by Joyce Owens at 10:36 AM No comments:

I have spent my life transforming my thoughts to visual images.

Personal emotions that I might never articulate because of shyness, or because I just don't know how to, have shown up in my art work. My lifelong search to be an artist has been realized through my paintings that are often populated with imaginary people who express my joy, my pain, my longing, my curiosity and more. I can be other characters through art. I can be young or old, male or female, even a bird or tree...My paintings inhabit who I am. I articulate my concerns for my community around racism, sexism, and fairness by painting my responses to these issues. I tell the story about the lives of slaves from my perspective and tout their resilience in a series I call Survivor Spirits. I honor my family ancestors through another series I call Pillars. 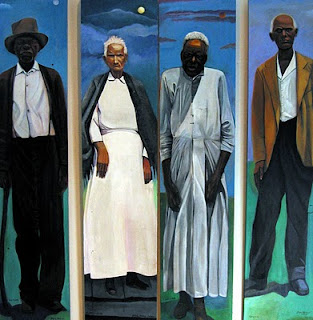 My need to be educated about my history and the world has inspired me to educate others. Art allows me that. People see in my paintings pages and chapters summed up in one visual image.
Now, I am also embracing my love of words. I have been writing an art blog for a couple of years. Text has crept onto my visual images and the images have grown to include multiple pages. I have had my writing published at the Museum of the African Diaspora's "I've Known Rivers" project, for the Chicago Now blog run by an unnamed major Chicago newspaper, The Studio Project  the Department of Cultural Affairs operates this year and more...to my surprise!

This blog will present my art but mostly my words and some of the things I have learned and would like to share with you. For example, I discovered some time ago that I believe in play and taking chances. Art allows me to indulge that tendency. I have always had it. My friends were shocked when I pierced my own ears, or straightened my own hair or dyed my shoes pink, just because I wanted to. But I was foiled each step of the way when I went too far, and finally tried to conform. I never really have, but I lived a safer life than I really wish I had...I want my own sons to believe in that sense of play and adventure. Safety is over-rated. If we don't take intelligent chances, we don't get anywhere! My curiosity was often squelched when I was young, traded for safety. But I don't advise it and so here I am...an artist who had hoped and believed my work could speak for me, now recognizing I have always been a writer and always immensely interested in expressing myself through words, too.
Posted by Joyce Owens at 8:06 AM 10 comments: